This article discusses the importance of the open public hearing portion of an FDA Advisory Committee meeting.

Many regulatory changes have impacted the FDA approval process for new drugs and medical devices, including the requirement from the Food and Drug Administration Amendments Act for an Advisory Committee (ADCOM) review. ADCOMs provide the agency with advice from outside experts on issues related to drugs, biological products, medical devices, and food. During an ADCOM meeting, an independent panel evaluates the benefits and risks of the product. The FDA poses one or more questions to the panel, including whether the product should be approved, and the meeting culminates with a vote on each question.

An important component of ADCOM meetings is the open public hearing (OPH), normally a one-hour session reserved for the public to share opinions about and experiences with the product. The OPH can last as long as, or longer than, the sponsor or FDA presentations during an ADCOM meeting, yet there is little research on any potential impact it may have on voting.

This article summarizes results from a review of ADCOM meetings for new drugs and devices between 2007 and 2014, and assesses the potential association between the majority opinion expressed during the OPH and committee votes. Findings show that the odds of a committee voting in favor of approval are 11.3 times higher when committee members are exposed to a positive OPH than a negative OPH (p=0.001; see Table 1).

This report suggests that a positive OPH is strongly associated with a committee voting in favor of approval.

A Short Synopsis of ADCOMs

The FDA began convening ADCOMs in the 1960s to evaluate drugs, and in the 1970s to review biologics and devices, while ADCOM meetings became mandatory for all new biomedical products in 2007 with the passage of the Food and Drug Administration Amendments Act.

In a typical one-day ADCOM meeting, the sponsor and the FDA deliver their presentations to the committee, each of which is followed by a brief Q&A. These presentations are followed by the OPH, in which the public, advocacy groups, patients, physicians, and other healthcare stakeholders are invited to deliver their personal comments to the committee members. Comments made during the OPH often reflect the public’s concerns regarding safety and can raise issues that committee members may then refer to in their deliberations. Alternatively, these comments can provide patient-centric arguments about the need for approval, particularly in cases where the drug being reviewed fills a critical unmet medical need.

To date, only two publications reference the importance of the OPH in influencing ADCOM members’ voting. In 2012, 3D Communications conducted a survey of more than 2,000 current and former ADCOM members to better understand what influences their votes. Approximately 77% reported that comments made during the OPH could influence their vote in some way. In a 2015 follow-up survey, that figure remained similar, at 81%.

Data for our current review were collected from public transcripts of ADCOM meetings, which are posted on the FDA’s website. Transcripts were limited to meetings for new drugs and devices that took place between 2007 and 2014. We excluded meetings about biologics or vaccines, applications for new indications, label revisions for drugs or devices and policy changes, and those that did not involve a new product. The time period coincides with the FDA Amendments Act of 2007, as well as the last two renewals of the Prescription Drug User Fee Act (PDUFA). Limiting meeting transcripts to this time period minimizes any confounding effects that may have occurred with changes in the regulatory approval process.

The methodology used in this review simplified the complexity of ADCOM meetings and did not factor in all variables that may play a part in the outcome of the meeting.

In total, 243 meetings met the inclusion criteria. Of those, 193 (79%) had an OPH with participants. Importantly, meetings with an active OPH increased during the time frame analyzed, from 50% in 2007 to 94% in 2014 (Table 2). Complete names and numbers of meetings for each ADCOM can be found in the sidebar. 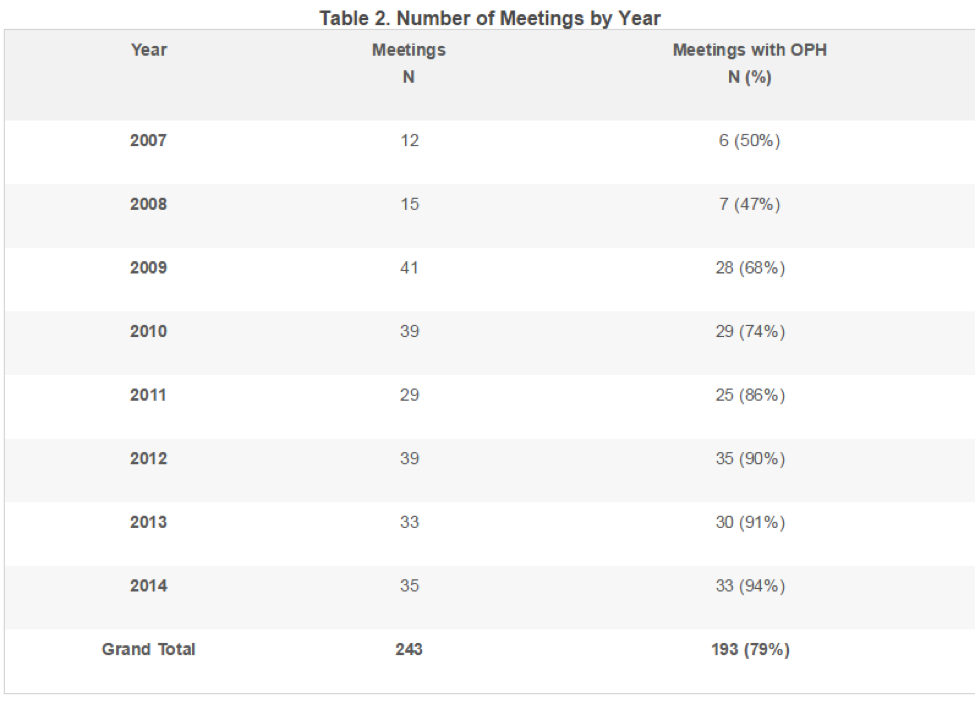 Table 3 summarizes the frequency of positive, neutral, and negative outcomes for all ADCOM meetings in the data set with an OPH. Overall, 71% of the meetings resulted in a vote for approval. The percentage of ADCOM votes for approval was higher for meetings with a positive OPH (79%) compared to meetings with either a neutral (55%) or negative OPH (50%). 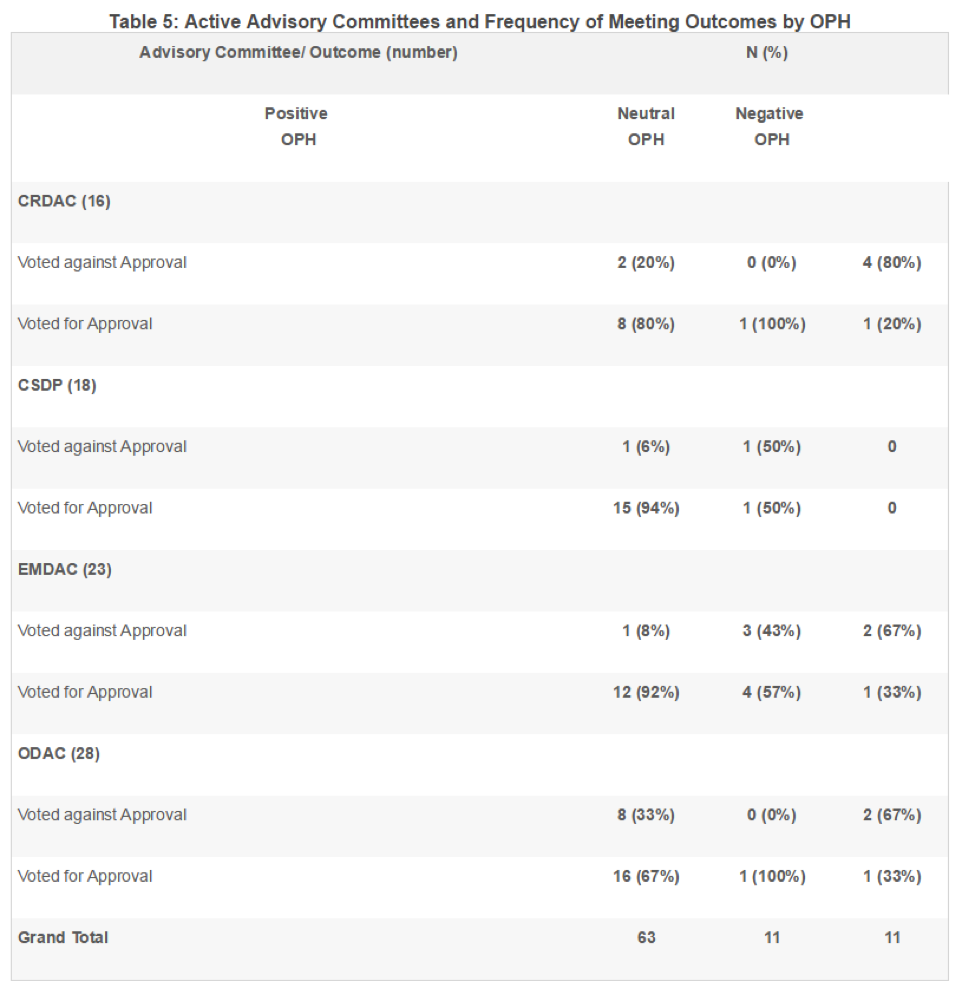 In its 2013 draft PDUFA V implementation plan (pdf), the FDA acknowledges that its framework for benefit-risk assessment greatly benefits from the unique and valuable perspectives that patients provide. As the FDA continues its efforts to incorporate patient perspectives through its PDUFA V patient-focused drug development initiative workshops, the agency’s push for patient participation, and the impact of that participation, is expected to grow, as reflected in the ADCOM meetings reviewed in this report. While only half of the meetings in 2007 had an OPH with at least one participant, nearly all meetings in 2014 had an active OPH. And among the four ADCOMs that met most frequently, the association between a positive OPH and a vote for approval (OR=11.3) was stronger than for all committees combined (OR=3.7).

Sponsors should consider building awareness of opportunities like OPHs in their ongoing relationships with medical societies, patient organizations, physicians, and other healthcare professionals. When these groups contribute real-life examples in the clinical setting and patients’ day-to-day experiences, their perspectives can provide context for the safety and effectiveness evidence submitted by a sponsor, the severity and impact of a condition, and the limitations of current standards of care. As reflected in the findings of this report, ADCOMs are receptive to these perspectives as they evaluate the benefit-risk framework of products under review.